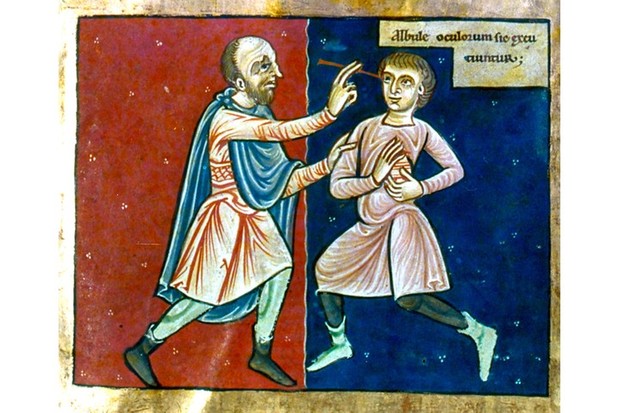 William of Auvergne begins his philosophical treatise proving the immortality of the soul with a discussion of the five ways that “human errors are taken care of.” The first, is “by sensation, through experience,” next by punishment, by philosophy, by authority, and finally through divine revelation. At the end of this list, William describes these methods for correcting human error as a cure for spiritual blindness: “The divine goodness has bestowed upon us these five ways, like five divine remedies or salves clearing the eyes, to heal blindness regarding errors and spiritual things” (23). By likening these five ways of “taking care” of human error to “remedies” or “salves,” William not only links methods of spiritual intervention with medical practice, but he also compares the soul to eyes that must be “cleared,” and sin to “blindness” in those eyes that must be “healed.” At the same time, William argues that the soul (or the intellectual spirit) has “its proper activity is strengthened in separation from the body,” since the body actually hinders the soul’s ability to discern spiritual things. Sin, in William’s schema, is essentially a spiritual disability, but one which only affects the body, and by-so-doing inhibits the soul; as a result, the only way to be free of sin is to be free of the body itself, so that the soul might “see clearly.” These two uses of the sight/blindness/soul/sin metaphor coexist for William – the soul is both a set of eyes that need to be cleared of blindness by the salve of experience, punishment, philosophy, authority, and divine revelation, and ALSO, the soul is defined specifically by its separation from the body, its ability to exist outside of, beyond, and even be strengthened by the body’s illness and inevitable death.

This comparison between blindness and sin was not uncommon in the Middle Ages. According to Edward Wheatley in his book Stumbling Blocks Before the Blind: Medieval Constructions of Disability that there is a propensity of examples of blinding being used as a metaphor for spiritual blindness and also being described as a literal punishment for sin (especially sexual sin) (129). Wheatley speaks at length about Christus medicus or the Christ as Physician trope which was popular in the Middle Ages as well, owing primarily to miracle stories from the New Testament (the image of Christ putting mud on the eyes of a blind man and telling him to wash his eyes to cure his blindness specifically comes to mind here) (155). However, what strikes me in William’s initial treatement of blindness is less the alignment of disability with sin, and moreso the very medicalize language applied to the five ways of “taking care” of human error – if blindness is a metaphor for sin, these five ways to correct sinful behavior are described as “remedies” and “salves” to help “heal” blindness. However, Wheatley notes that “medieval texts generally do not allude to medicine’s triumphs over blindness. Cures of this impairment are more readily available in hagiographic and other religious texts…there, hagiographers (especially during the thirteenth century and later) often state that people suffering from impairments tried medical cures unsuccessfully before resorting to the religious ones, a progression that serves to enhance the divine power in the miracle by comparison to the previous medical failure” (186).

We do know, however, that medieval people thought a lot about cures for blindness. The image I chose for this blog post is just one of many like it from medieval medical treatises, and even the Trotula – a medical text specifically about women’s medicine – includes two explicit mentions of blindness, one in the passage on the suffocation of the womb [“Sometimes the woman is contracted so that the head is joined to the knees, and she lacks vision, and she loses the function of voice, the nose is distorted, and the lips are contracted and she grits her teeth, and the chest is elevated upward beyond what is normal” (71)] and the other in the Compound Medicines in the Trotula Ensemble, were there is a cure listed for blindness, a salve called “Trifera saracenica” (called this because “it was invented by the Saracens”) which not only “renders a person young again” but also treats jaundice, liver problems, head pain on account of a “fumosity of red bile,” “double-tertian fever” and “restores sight lost from [excessive] heat” served with cold or hot water depending on whether it is cold or hot tempers that are imbalanced.

And yet despite his description of these “fives ways” as a remedy or a salve, William seems to distance himself from any curative impulses regarding the body, but rather relies on its propensity for illness to make his claims regarding the immortality of the soul. Throughout his philosophical treatise, William uses the senses (often sight specifically) to help him parse what makes the intellect (and thereby the soul) distinct from the mortal body. His main way of doing so is to discuss the way that the senses and the organs which govern them can be injured or diseased: “For we do not say that exterior sight or hearing injures or impedes the intellect, but that it truly occupies the human mind so that it is not free at that time for intellective activity, because it is drawn through sight or through hearing to particular external things” (29).  He uses this “sight” comparison again more extensively a bit later in the treatise: “If someone asks how sight can be corrupted by visible forms, we answer that sight is a harmony as regards its organ and its power is partially in the organ. For this reason it is necessarily destroyed by the destruction of that organ to the extent that it depends upon it. But the organ of sight is destroyed by things that exceed its harmony, that is, by powerful objects of sight. Just the opposite is the case with the intellect, since the intellect does not have a determinate part in the body that is its organ, and it is strengthened and twos strong as a result of powerful objects of the intellect” (48). Thus, the bodily senses are distinct from the intellect specifically because it is capable of being “destroyed” by “things that exceed its harmony” – that is, the eyes of the body are distinct from the metaphorical eyes of the soul specifically because these eyes can be blinded.

In Geoffrey of Monmouth’s The History of the Kings of Britain the story of Britain’s origins is propelled by a single prophecy, which Geoffrey puts in the mouth of the goddess Diana, the “goddess of woods.” 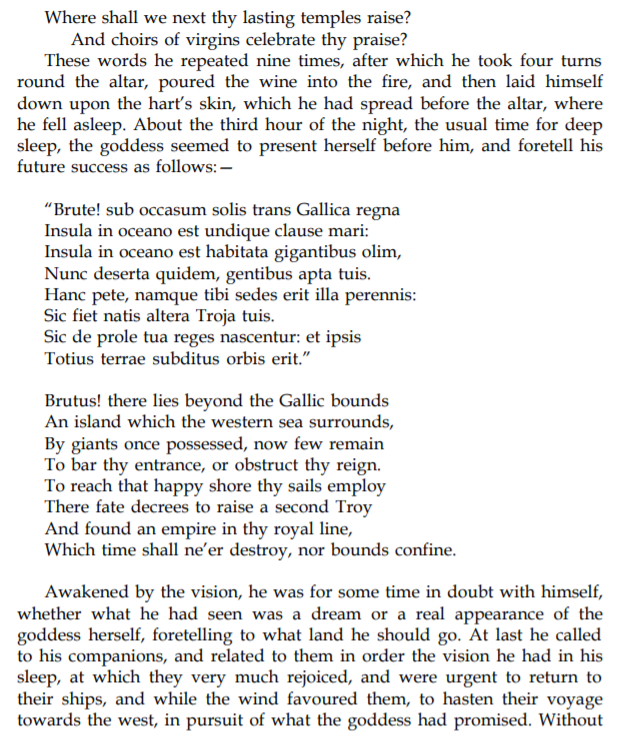 My question this week is about how prophecies function in Geoffrey’s text as a simultaneously propelling and stalling force, one which is inextricably linked from the beginning of the text with the non-human world. In this moment where he hears the prophecy about the British Empire, Brutus is placed at the intersection of several different forces: not only the powerful goddess Diana, the powers of ritualistic sacrifice, religious power, and the forces of the non-human world (sitting and falling asleep on the hart’s skin), but also the powers of genre and the narrative thrust of prophecy and inevitable (pseudo) history. In this moment, when he wonders whether everything he saw from the goddess was just a dream, teeters on the edge of his own genre. However, it is clear to Geoffreys readership who Brutus is; there is no suspense in this moment, no surprise about whether or not he will follow the prophecy, since any of the many readers of Geoffrey would be aware of the isle of Briton that stands as evidence of this prophecy’s fulfillment.

There is, of course, another moment in the History where prophecies become prominent. In Book VII Geoffrey interrupts the narrative flow of his history with an entire book of the prophecies of Merlin. He says he does so at the behest of Alexander bishop of Lincoln. These prophecies also link together history and magic, religion and the non-human and national identity (also DRAGONS!).

So what is the roll of prophecies like this in pseudohistory when constructing ideas of national identity? Is it to propel the inevitability of the narrative? Prophecy is something with heavy religious connotations, specifically biblical. This emphasis on prophecy is an attempt to link Britain’s history with religious validity and also with the natural world. Tracing the ways in which these prophecies function as a legitimizing tool will help us